Keep the Weight Off Through Exercise 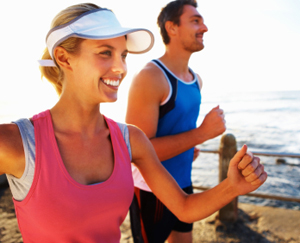 Cutting calories generally leads to weight loss, but what’s the secret to keeping it off? Results from one study support what exercise enthusiasts have been saying for years: at least part of the answer is exercise. The study, published in Obesity, found that women who lost weight through dieting gained less weight in the subsequent year if they stuck with either an 80-minutes-per-week aerobic exercise or strength-training (resistance-exercise) program than if they didn’t exercise.

The 97 women were randomly assigned to one of three groups:

They lost an average of about 27 pounds (12.3 kilograms) during the weight-loss phase of the study and returned for follow-up evaluation one year after weight loss.

Keep it up to keep it off

In addition, abdominal fat—also known as “visceral fat,” and widely accepted to be the form most dangerous to health—did not increase in women who continued to exercise, but increased by 25 to 38% in nonexercisers. There were no differences between the effects of aerobic exercise and resistance exercise.

The authors concluded that “as little as 80 min per week aerobic or resistance training had modest positive effects on preventing weight regain following a diet-induced weight loss. More importantly, though, both aerobic and resistance training prevented regain of potentially harmful visceral fat.”

There are lots of reasons to avoid regaining weight you’ve lost. Weight gain, even in normal-weight people, is frequently accompanied by increases in cholesterol levels and blood pressure, and increases the risk of cardiovascular disease, diabetes, and some cancers. Abdominal fat has a particularly strong association with diabetes and cardiovascular disease, and appears to be more strongly linked to hormone-sensitive cancers such as breast cancer than fat that is deposited elsewhere on the body.

In addition to maintaining a regular exercise program, here are some suggestions to help you manage your weight:

Maureen Williams, ND, received her bachelor’s degree from the University of Pennsylvania and her Doctorate of Naturopathic Medicine from Bastyr University in Seattle, WA. She has a private practice on Cortes Island in British Columbia, Canada, and has done extensive work with traditional herbal medicine in Guatemala and Honduras. Dr. Williams is a regular contributor to TraceGains Newswire.