What do they do?

Multiple vitamin-mineral (MVM) supplements, sometimes known as multivitamin-mineral supplements, contain a variable number of essential and/or non-essential nutrients. Their primary purpose is to provide a convenient way to take a variety of supplemental nutrients from a single product, in order to prevent vitamin or mineral deficiencies, as well as to achieve higher intakes of nutrients believed to be of benefit above typical dietary levels.

Many MVMs contain at least 100% of the Daily Value (DV) or the U.S. Recommended Dietary Allowance (USRDA) of all vitamins that have been assigned these recommended values. Mineral levels may be lower, or in the case of high potency MVMs, most or all mineral levels may also be at 100% of DV or USRDA. Micronutrients that should be included in a complete MVM are vitamin A (or beta-carotene), vitamin B-complex (thiamine, riboflavin, niacin and/or niacinamide, vitamin B6, folic acid (folate), vitamin B12, pantothenic acid, and biotin), vitamin C, vitamin D, and vitamin E, and the minerals calcium, magnesium, zinc, iodine, selenium, copper, manganese, chromium, molybdenum, and possibly iron. Some MVMs also contain vitamin K, but people taking the medication warfarin (Coumadin) should consult their doctor before taking vitamin K supplements. Phosphorus is another essential dietary mineral, but is so abundant in the diet that it does not need to be included in an MVM formula. The only exception is for elderly people, whose diets tend to be lower in phosphorus. Calcium interferes with phosphorus absorption, so older people who are taking a calcium supplement might benefit from taking additional phosphorus.

Potassium is an unusual case, as adequate amounts of potassium cannot, by law, be sold in nonprescription products. Thus potassium, when included in an MVM formula, represents only a trivial amount. MVMs may contain iron, but these should be taken only by people who have been diagnosed as having, or being at high risk of, iron deficiency, or who have a history of frequent iron deficiency.

Some nutrients may be beneficial at levels above what is possible to obtain from diet alone, and an MVM formula can provide these levels as well. Nutrients that may be useful to most people in larger amounts include vitamin C, folic acid, and calcium. Vitamin E has long been thought to protect against heart disease beginning at 100 IU per day, but more recent research has cast doubt on the value of vitamin E for heart-disease prevention. Large amounts of vitamin B1, vitamin B2, vitamin B3, and pantothenic acid are often included in MVM formulas. Some people claim to experience improvements in mood, energy, and/or overall well-being when taking higher-than-RDA amounts of B vitamins. While there is not a great deal of scientific research to support those observations, one double-blind study of healthy volunteers found that an MVM supplement significantly reduced anxiety and perceived stress levels, and possibly improved energy and the ability to concentrate.

Another class of non-essential nutrients is the flavonoids, which have antioxidant and other properties and have been reported by some, though not all, researchers to be linked with a reduced risk of heart disease. MVM supplements also frequently include other nutrients of uncertain benefit in the small amounts supplied, such as choline, inositol, and various amino acids.

Preliminary and double-blind trials have shown that women who use an MVM containing folic acid, beginning three months before becoming pregnant and continuing through the first three months of pregnancy, have a significantly lower risk of having babies with neural tube defects (e.g., spina bifida) and other congenital defects.

In one double-blind trial, schoolchildren received, for three months, a daily low-potency vitamin-mineral tablet containing 50% of the USRDA for most essential vitamins and the minerals. The subjects were “working class,” primarily Hispanic, children, aged 6 to 12 years. Dramatic gains in certain measures of IQ were observed in about 20% of the supplemented children. These gains may have been due to the correction of specific nutrient deficiencies (for example, iron) found in these children. However, it was not possible in this study to identify which nutrients caused the increases in IQ.

One-per-day multiples are primarily B-complex vitamins, with vitamin A, vitamin C, vitamin D, and vitamin E included either at high or low potency, depending on the supplement. The rest of the formula tends to be low potency. It does not take much of some of the minerals—for example, copper, zinc, and iron—to offer 100% or more of what people normally require, so these minerals may appear at reasonable levels in a one-per-day MVM.

One-per-day MVMs usually do not provide sufficient amounts of many nutrient supplements shown to benefit people eating a Western diet, such as calcium and magnesium. One-per-day MVMs should therefore not be viewed as a way to “cover all bases” in the way that high-potency MVMs, requiring three or more pills per day, are viewed.

How much is usually taken?

The following table shows the USRDA for nutrients as well as suggested optimum amounts of each vitamin and mineral that should be present in a daily MVM supplement for healthy people. Some people may want to take larger amounts because of specific health concerns. They should read the individual nutrient sections to learn about safe upper ranges of supplementation.

Because one-per-day formulas typically do not contain even the minimum recommended amounts of some of the nutrients listed here, multiples requiring several capsules or tablets per day are preferable. With two- to six-per-day multiples, intake should be spread out at two or three meals each day, instead of taking them all at one sitting. The amount of vitamins and minerals can be easily increased or decreased by taking more or fewer of the multiple.

Which is better—capsule or tablet?

Multiples are available as a powder inside a hard-shell pull-apart capsule, as a liquid inside a soft-gelatin capsule, or as a tablet.

Most multiples have all the ingredients mixed together. Occasionally the B vitamins react with the rest of the ingredients in the capsule or tablet. This reaction, which is sped up in the presence of moisture or heat, can cause the B vitamins to “bleed” through the tablet or capsule, discoloring it and also making the multiple smell. While the multiple is still safe and effective, the smell is off-putting and usually not very well tolerated. Liquid multiples in a soft-gel capsule—or tablets or capsules that are kept dry and cool—do not have this problem.

Capsules are usually not as large as tablets, and thus some people find capsules easier to swallow.

Some people prefer vegetarian multiples. While some capsules are made from vegetarian sources, most come from animal gelatin. Vegetarians need to carefully read the label to ensure they are getting a vegetarian product.

One concern people have with tablets is whether they will break down sufficiently to allow the nutrients to be absorbed. Properly made tablets and capsules will dissolve readily in the stomach.

Some multiples are in timed-release form. The theory is that releasing vitamins and minerals slowly into the body over a period of time is better than releasing all of the nutrients at once. Except for work done on vitamin C—some of which showed timed-release C was better absorbed than non-timed-release—research on this question has been lacking. It is possible that some nutrients, especially minerals, will be poorly absorbed from timed-release multiples. Also, some doctors have concerns about the safety of ingesting the chemicals that are used in tablets or capsules to make them timed-release.

What about nutrient interactions?

Another area of controversy is whether all of the nutrients in a multiple would be better utilized if they were taken separately. While certain nutrients compete with each other for absorption, this is also the case when the nutrients are supplied in food. For example, magnesium, zinc, and calcium compete; copper and zinc also compete. However, the body is designed to cope with this competition, which should not be a problem if multiples are spread out over the day.

Unless an artificial sweetener like aspartame (NutraSweet®) or saccharin is used, the only sweeteners available are sugars. Generally, consuming sugar is undesirable, and not having it in a chewable dietary supplement would be preferable. Xylitol, a natural sugar rarely used in chewables because it is relatively expensive, would be an ideal choice since it does not cause tooth decay or other known problems.

Some chewables, such as vitamin C, contain more sugar than any other ingredient. In such products, the sweetener should be listed as the first ingredient, but often is not. Care needs to be exercised when reading labels about chewable vitamins. If it tastes sweet, it contains sugar or a synthetic sweetener. In addition, chewable vitamin C products should contain buffered vitamin C, rather than the acidic form, ascorbic acid, in order to avoid damaging dental enamel.

When is the best time to take a multiple?

The best time to take vitamins or minerals is with meals. Multiples taken between meals sometimes cause stomach upset and are likely not to be as well absorbed. 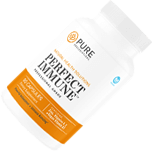